Another great year of E-Sports at Lincoln High School is in the books. E-Sports is growing more and more each year. This year we played 3 different games against other High Schools in the central part of the United States. Tuesdays we played League of Legends on PC. Wednesdays was Super Smash Brothers on Switch, and Thursdays was Rocket League on PS4. This year was a huge success in terms of multiple teams making it into the playoffs for the first time, and also having Marshalltown Community College visit and talk to the kids about possible scholarships once they graduate High School.

I want to give a big thank you to the assistant coaches Tal Keown and Darron Kitterman. This year wouldn’t have been what it was without these two. Tal has immense knowledge in many different games and was a major asset with making another great year a success. He’s always supportive of the kids, and the programs future.  Darron has always helped out on the technical side when we needed it and especially the promotional aspect around the district. A few other people I want to thank is our Athletic Director Phil Chia and Principal Paul Williamson. They have been very supportive with the E-Sports program. We definently couldn’t be doing this each year without them. I understand it isn’t your classic sport, but it has been very positive in these kids lives. They have created friendships with fellow students that have similar interests as them and that’s awesome!! Lastly, I want to thank Amy Palmer, Genevieve Rosenbalm, Kathleen Downes, and Dave Enos for allowing us to use their classrooms after school for our E-Sports matches.

Super Smash Brothers is a crossover fighting game by Nintendo. It is played on the Nintendo Switch, and consists of primarily Nintendo characters. This game consisted of having 3 players per team. Each player would play a player from another team 1v1 in a best of 3 format. The team that wins 2 out of the 3 matches would win that week.

This team consisted of 3 freshman: Nate Kerns, Keaton Hurt, and Tyson Minteer. Nate’s main characters included: Steve, King K. Rool, Mr. Game and Watch. Keaton’s main characters were: Diddy Kong, Pokemon Trainer, and Byleth, and Tyson’s main characters were Zero Suit Samus, Joker, and Samus. In the Fall of 2021 Lincoln Gold made it into the playoff field of 32 teams as the 7th overall seed by going 6-1 in the regular season. Unfortunately they got upset by the 25th overall seed Northfield High School from Northfield, Minnesota. This was a great accomplishment considering this was their first opportunity to play competitively and made it into the playoffs the first semester they were eligible. At the end of this season they stated, “Next season all we want is to get farther than we did this season.” This is exactly what they did in the 2nd semester.

In the Spring of 2022 Lincoln Gold made it into the playoffs yet again after finishing the regular season going 6-1 and getting the 5th overall seed. This time the field was 64 teams due to the increase to 145 teams competing from across the United States. They not only won their first round, but won their first three rounds of the playoffs. Teams they defeated include: Illini West High School out of Carthage, Illinois, St. Benedict at Auburndale from Memphis, Tennesee, and Harlan High school in Iowa. They ended up falling short and losing in the Elite 8 to North Millard High School from Omaha, Nebraska. This was a very successful season for team Lincoln Gold. They greatly improved over the course of the school year, and have a bright future especially being all freshman and best friends. I see big things and possibly scholarships if this team sticks with it over the next four years.

This smash team was comprised of 3 Juniors: Nedum Kpurukoo , Nate Andrews, and Victor Hernandez. Nedum’s main characters that he played were: Cloud, Hero, and Sora. Nate’s main characters were Cotrin, King Dedede and PPlant.  A few teams that Lincoln Black played this year included: Valley Center High School in Valley Center Kansas, Nashwauk Secondary in Nashwauk Minnesota, and Marquette University High School out of Milwaukee Wisconsin.  Lincoln Black had similar fall and spring seasons going 2-5 respectfully. They had their ups and downs throughout the year but are looking forward to making playoffs come next school year. They were very positive throughout and continue to practice to get better for their Senior years.

Our 3rd and final smash team had 2 freshman and 1 junior. Brandon Siegel(Jr.), Seth Fredrigill(Fr.), and Myez Ibrahim(Fr.). Brandon’s favorite characters included: Yoshii, Bowser Jr, and Chrom. Seth’s were Menonite, Samus, and Dark Samus. Lastly, Myez’s were King Dedede, Incinoroar, and Lil Mac. Team Lincoln Maroon had 2 more wins during the Spring season than their Fall season. They went 2-5 in spring and 4-3 in the fall. They finished only 4 spots out of missing the playoffs placing 68th. This was great considering this was the first season playing competitive E-sports for all of them. They will all be back next year to hopefully continue the trend they set and improve. Some teams that they competed against this year include: Columbus High School from Columbus Kansas, Dilworth-Glydon-Felton from Glyndon Minnesota, and Henry County High School from Paris Tennessee.

League of Legends is a 5v5 strategy game played on PC. The object of the game is to work with your team to ultimately destroying the other teams base and winning the game. League of Legends is one of the most popular games in the world with 125 million active monthly users. There is a pro-tour and the world championship prize currently is 2.2 million dollars.

Our League of Legends team consisted of 7 total players with 2 of those being substitutes when needed. Nedum Kpirukoo(Jr.) was our top laner. His mains were Sett, Yorick, and Ornn. Nedum has always played top lane and is the veteran of our team playing since he was a freshman. He’s also one of few players on our E-sports team that plays multiple games. He has always been a great leader, and is basically a second coach at this point. Phillip Dietz (Jr.) was our mid laner. He enjoyed playing as Neeko, Ahri, or Veigar. This was Dietz’s first year on our squad and improved drastically over the course of the season. He’s always willing to learn and work on  certain areas that he knows he can get better at. Ryan Cannon (Fr.) was our jungler. He mained Warwick and Shyvana. Ryan was hesitant to play competitive at the beginning of the year, but has come a long way. He always comes up and practices when we have game nights after school. Elle Cochrane (Jr.) was our support. She mained Nautlius, Taric and Swain. This was Elle’s first season playing competitively as well. She joined with one of her good friends Olivia which I will talk about next. They played in bottom lane together and did an amazing job. Being friends helped with communication as that is very important for bottom lane as you are reliant on each other for most of the game. Olivia Tarantino (Jr.) was our ad carry. Olivia enjoyed playing Draven, Caitlyn, and Ezreal. Ad carry is one of the harder roles to play considering you are the squishiest. There isn’t as much room for error in terms of making mistakes. Olivia was a great addition to our team this season. Myez Ibrahim(Fr.) Filled in for us a few weeks as sub. I thank Myez for always being ready when called upon this year. His favorite champs were: Braum, Brand, and Miss Fortune. Our last member and sub was Kaleb Dao(Jr.) he would sub in at jungle when we needed him to. He is still new to the game but made great strides over the course of the year. He enjoyed playing Volibear and Warwick.

As you can see our overall record this year was 15-13. This is deceiving since we were 5-9 in the fall and improved to 10-4 in spring while getting our first playoff birth in school history. This is a great accomplishment since only the top 32 teams make playoffs. Some teams we played this season were: Moorhead High School out of Moorhead Minnesota, and West Fargo High School out of West Fargo North Dakota. We ended up losing in the first round of the playoffs to Middleton High School out of Middleton Wisconsin. It wasn’t as far as we hoped to make it, but making the playoffs was a big step. It’s also very positive that we will have all returning next year to hopefully make a deeper run in the playoffs.

Our Rocket League team consisted of 3 members: Nate Andrews (Jr.) Phoenix Shelton (Jr.) and O’Tayveon Williams (So.). We went 3-4 in the fall, and took a step back during the spring going 1-6. Although it wasn’t the most successful season these three enjoyed playing each week and still showed up which I commend them on. Easy to not want to play when things aren’t going your way. They hope to get better over the summer and continue playing next year.

By: Head Coach- Will Kramer 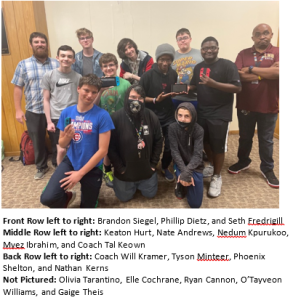