“The Academic Decathlon team will go to the state competition March 1st and 2nd, held in Mt. Vernon, Iowa. This is the team’s fifth state meet in 6 years. Academic Decathlon consists of 10 events; six are multiple choice tests and the other four include speech, interview, essay, and “Super Quiz.” This year’s topic is Russia. 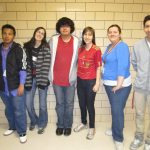