LHS Key Club Visited By Cast of Up With People

Seven cast members from Up With People visited the Lincoln High School Key Club on Wednesday, February 17th. The cast members sang an upbeat song about journeys, and they had a great conversation with the Key Club members.  The 100 cast members from Up With People represent 19 different countries from around the world. Both organizations are focused on  community service. The group has just begun its 2016 Tour on two continents and will be performing in concert this weekend at Grandview University. Proceeds from the concert will benefit the Kiwanis Miracle League in Des Moines. 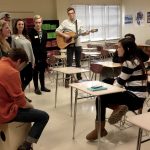 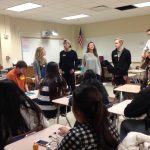 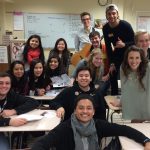